The teleporter in Team Fortress is an integral part of the game and people use it regularly. That’s why its so unsettling to the red team when Engineer and Medic tells them that it’s been causing tumors and that they’re going to die soon. Enjoy the funny and quirky animation from Valve featuring all the favorites Medic,Engineer,Spy,Scout,Soldier,Sniper and one special lady in the scene.

The expiration date animation was created to introduce the boss battles coming soon to Team Fortress (reminds me of Evolve and Left for Dead). As mentioned by the people in the comment section, a full length animation or a series wouldn’t be a bad move for Valve as TF (Team Fortress) has a massive fan base. I present the evidence of said fans and the highest voted comment 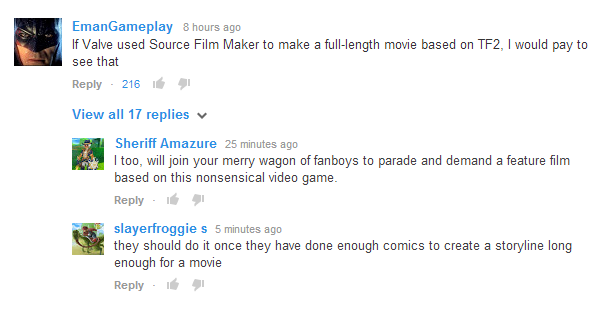 Some of our other Favourite Shorts about Team Fortress (Pyro, our favorite short!)

Have a look at their other “Meet the team” animations here