As The Year We Shall Never Speak Of approaches its holiday Christmas shopping frenzy, it’s perhaps time for us all to take a step back, remove ourselves from our day to day grief of dealing with the passing of Leonard Cohen ( and the United States of America), and get back to our roots.

Earlier this year Disney released what is perhaps one of their greatest animation successes, Zootopiatropolistown, to the critical acclaim off filmgoers everywhere. It made a tonne of money and has assured the deep down dark NSFW legion of Tumblr and deviantArt commissioners new material for decades to come.

Zootopia is a great flick, with a strong message, excellent character development, and some of the most drop-dead gorgeous animation, character, and environment design that Disney has ever produced. It raised Disney’s bar pretty darn high for anything in the future, and so, it’s quite fair to say that audiences everywhere were really eager to see if Moana would keep up the high standards set by a bunny cop and her huckster fox buddy.

I would not go so far as to say Moana upped Disney’s current ante, but at the very least it’s a thoroughly enjoyable adventure that can proudly claim to keep Disney’s name high.

On a technical side, like its predecessor, Moana is utterly gorgeous to look at. Its characters, textures, and animation is the stuff eye-candy is made of. When not being treated to an empty horizon of ocean for large stretches of time, the environments look stunning, and in all fairness the water simulation is of a quality that would make ILM jealous. Not only does it feel realistic, but it also feels artistically considered – and like any technical director can tell you, that is no mean feat.

At times, it was a little eerily reminiscent of James Cameron’s work on The Abyss from a few decades back, but of course with a little extra oomph in the rendering department. As it’s a Princess film, it’s also a musical and for the better part the music was great, and not as easy to…. let go….. of as that of other films.

As far as Joseph Campbell’s Monomyth and Clarisssa Pinkola Estés’s Women who Run with Wolves go, it’s pretty much dead on target. I mean, the Approaching the Inmost Cave literally takes place in a cave. Descent into the Underworld? Literally in the underworld. Many can argue that using the Monomyth in such a on-the-nose manner is dated, but it’s hardly fair to fault a story for playing by the rules.

However, much to my chagrin, Moana is about as stock-standard Disney Princess material as can get, and very little of anything new has been explored with her character and relationship with her world.

Spunk? Check. Plucky animal sidekick with a meta joke about it? Check. Conservative dad? Check. Wise grandma mystic character? Check. Familial disobedience that results in the salvation of an entire culture? Double check. If you’re looking for anything new in a female character from Disney, I’m afraid you’re not going to find it.

It would be folly to consider this a bad thing, however. After all, blues music only has 12 bars that are set in stone, but it still stays great music. It would have been nice to see the character of Moana take the types of turns we’ve seen other female characters in Western animation have taken in recent years, though.

Luckily the same can not be said for the character of Maui. For a start, the character design is a thing of wonder as they took what is essentially the ugliest face in the universe, and made it incredibly likeable. But what really pulls at the storytelling short and curlies is his progression and representation of a tragic character.

I’m not talking about the subject of Deathcab for Cutie song, but a honest-to-glob, bonafide Greek tragic figure with proper motivations, flaws, and strengths. Having a character with this much potential for development is of course frustrating in its own way, as, instead of focusing on this development, we’re focusing on nothing new from a Disney princess whatsoever.

Disney played its storytelling very safe with Moana, and I would argue that they played it a little too safe. With other studios such as Laika, whom also rely very heavily not the Monomyth in their storytelling, making such great leaps and bounds in their characters and story arcs, it’s always a bit disheartening to see Disney pluck fruit from last year’s low hanging branches.

This is a minor criticism, however, as the movie nonetheless remains incredibly enjoyable and entertaining. You’re never left feeling dead at sea, and the story flows near seamlessly from one scene into the other. With great animation, great technical direction, thoroughly enjoyable music, and superb editing, the film remains a great holiday choice for the family and animation connoisseur alike. 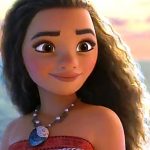