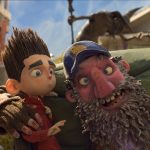 When I first saw ParaNorman when it hit the South African big screen, it very quickly joined Princess Mononoke and The Incredibles as one of the few films I’ve watched twice in less than twenty four hours.

ParaNorman is the story of a young boy, Norman, who can see and talk to ghosts. Naturally everyone else, including his own family, thinks he’s crazy. But soon strange things start to occur and some people realise Norman might not be so crazy after all.

This being a stop-motion film, I have to start with the animation. Despite being released in 2012, ParaNorman still holds up extremely well, even when compared to Studio Laika’s most recent film, Kubo and the Two Strings. The models are beautifully designed and incredibly detailed, and the movie still has that incredible “imperfect” movement that is associated with stop-motion (as an aside, one of my gripes with Kubo was it looked too good for stop-motion animation and felt more like a CG film). The years of effort that went into bringing this film to life is proudly displayed for all to see on the screen.

As beautiful as ParaNorman is to look at, it’s the characters and how the story unfolds that will really hit home, particularly if you were the outsider growing up. The characters, even the supporting cast, are given depth, and sometimes in a completely unexpected way. Seeing the characters with all their flaws and quirks, really adds to the emotional engagement I had with the film.

Taking a look at the story, how the events in the story unfold and affect the characters, was not something I was expecting when I first watched this movie. I had gone into ParaNorman thinking that it’ll be easy on the eyes, but will keep themes and ideas in line with what you’d expect: it may be a creepy and animated, but it’s still a children’s movie. Was I wrong about that. ParaNorman deals with being ostracised for being different, bullying, family, being open minded, and many, many, other mature themes. It was unexpectedly more cerebral than I thought it to be, and in a damn good way.

The film is not perfect however. There are a few moments in the film where the pace slows down a bit too much, and Laika has this thing about being a bit “on the head” with some of their dialogue, and it usually affects the climaxes of their films. Unfortunately ParaNorman is no exception in this regard.

Overall, ParaNorman is a great film that animation junkies will absolutely fall in love with. Kids and other adults will also enjoy it, but undoubtedly this was made by artists, for artists.