The hero we deserve. Asterix and the Mansions of the Gods

As can be expected, Obelix pretty much stole the show.

Animation-wise, this film does its source material justice, and delivers some astoundingly good character performances.

If screaming incoherently for five minutes straight in a rapturous cacophony of  joy would have qualified as a critical review of a film, then that’s what I would have done for this review.

If you’re South African, chances are you grew up reading English or Afrikaans versions of Asterix. Asterix is a pretty big deal. When reading any history texts on the Roman Empire, it is in fact quite impossible to imagine any other face for Julius Caesar than the one Uderzo had drawn for him. Nowadays, there’s a lot of people complaining about comics not being inclusive, and though it does sometimes miss the mark, I know of no series of comics as widely read that are as inclusive and progressive as Asterix comics.

Uderzo and Goscinny were very much the Frank and Ollie of the Marcinelle school of comics back in the sixties, and with Asterix’s adventures, found themselves telling stories to a worldwide audience for well over fifty years. To this day, their polished social commentary and tongue-in-cheek look at the world remains not only relevant, but impressively progressive.

There’s been quite a few animated adaptations of the world’s most famous Gaul, and whilst they have mostly been hits and misses ( with some really catchy earworm theme songs), Asterix has long been on a bit of a back seat when it comes to large-scale film productions – especially considering how much money directors and  like Steven Spielberg poured into the controversial Tintin motion capture film.

Now, with Asterix having been given the large-scale 3D treatment, it’s finally time for it to show the world at large why this is one of the most popular comics of all time.

And oh boy, it really does exactly that.

Directed by Louis Clichy and Alexandre Astier, The Mansions of the Gods remains true in spirit to the original content, delivering really great physical comedy gags and a cornucopia of bad puns and pop culture references.

As can be expected from a full-length motion picture, the film adds a bit of extra story-meat to the original plot, and though this might sound like a bad idea, the resulting story had a great deal of heart to it.

From an animation point of view the film is quite a marvel, and demonstrates the strengths of European animation as opposed to the often loud, big-mouthed, wavy-eyebrowed, stuff one would expect from studios such as DreamWorks.

As for rigging, lighting, and rendering, the film emulates the dynamism of the original art masterfully, and at times I forgot I was watching a movie, instead feeling as though I’m paging through my dad’s stack of Asterix comics. Being a French film, some watchers might feel a slight disconnect with the voice cast, but this is a trivial matter as you are constantly barraged with gorgeous animation, beautiful renders, and a compelling tongue-in-cheek comedy of errors, slights, and slapstick violence.

For fans of comedy, adventure, and art in motion, I can definitely recommend this film.

Asterix and The Mansions of the Gods 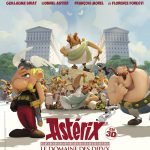