Military fonts are something almost any graphic designer or digital artist has searched for at some point in their lives. From classic military stencil fonts to futuristic-looking dystopian fonts, there’s a surprising range of uses for these styles, past a simple Call of Duty montage title.

There are, however, a lot of really cheesy and badly designed military fonts out there. It’s a territory in which you’ll easily find fonts which are a little lackluster, underwhelming, or just plain badly designed. This is why we’ve put this guide together – to help you find some fantastic artisanal military fonts, which you can use in a whole variety of designs and styles.

We’ve chosen a whole host of different styles, and looked at the many takes on the classic military font, from stencils to Cyrillic, covering a range of style-eras such as WWII or Vietnam-style fonts. This is your all-in-one guide to the best 10 military fonts currently available.

Targo 4F Stencil was the best stencil font we could find. Apart from their fantastic color choice in their demo images, Targo stood out to us for a number of reasons.

Firstly, it encompasses the classic military stencil feel quite well. Secondly, it’s multilingual meaning you can use it with alphabets from different languages, such as Cyrillic, Baltic, and Thai. Finally, it’s got a very slick, modern and versatile design which is easily adaptable to a variety of uses outside of standard military font use. It’s a great addition to any designer’s library.

The Top Navy Font We Found

While very stereotypical, the Old Navy font was our favorite Navy-style military font. It’s probably exactly what you need if you’re looking for a navy-style stencil font, being simple, classic and eye-catching giving you an instant Navy vibe. There’s not much more to say than this, as it’s a simple, concise and effective font set.

Manufaktur is a Soviet-inspired military block font, which was the best one we found by a long shot. One can tell it’s been designed with great care and taste, firstly from a design perspective and secondly from a usage perspective.

The font has 61 total variations, all different in weight and spacing combinations, offering a wide array of options to get some blocky Soviet / Swiss-inspired typography on the go. It was initially inspired by a cast-iron sign on an old Swedish industrial machine, which is also pretty cool.

In this next section, we’ve reviewed and broken down what we like, and what we don’t, about the ten best military fonts we could find. Each review has a few handy pointers such as a $-$$$ price rating, as well as any other handy details you might need at a glance.

Be sure, as well, to check out our buyer’s guide at the end of the article. This covers a few things to look out for when choosing a font, depending on your usage and intent (looking to stencil some fonts? Check out our mechanical pencils guide here). But more than that later. 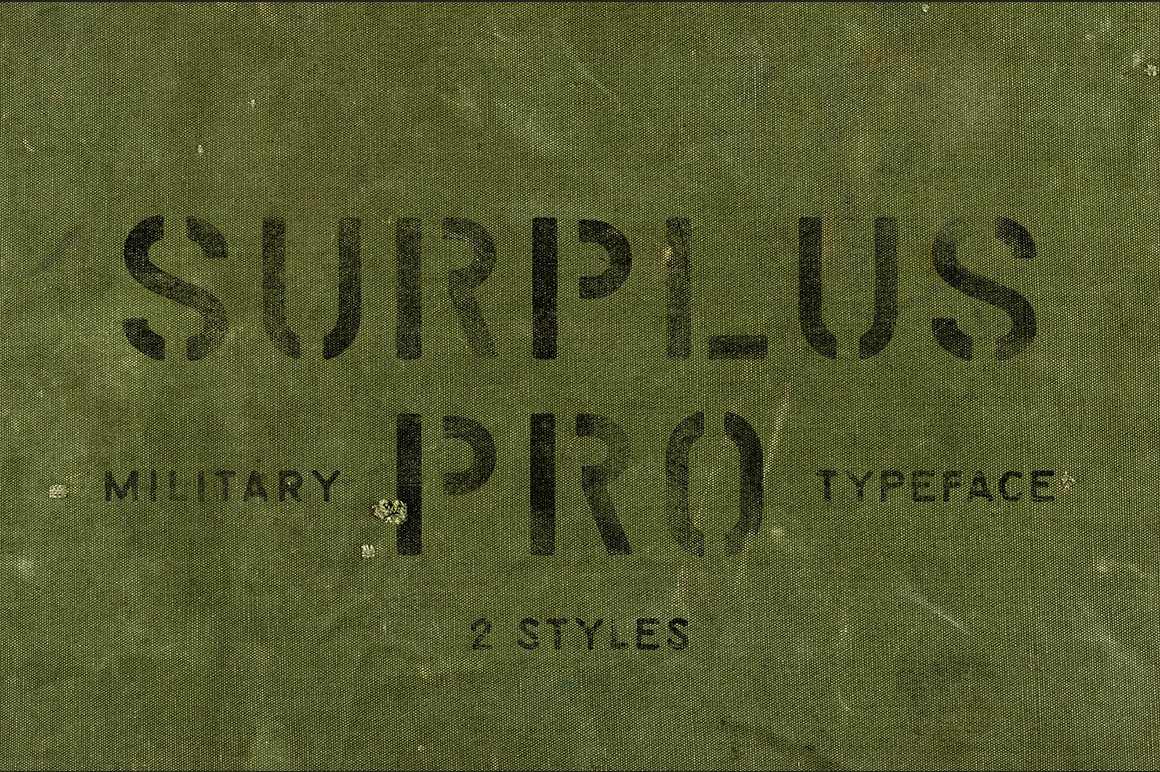 If you’re looking for a simple, classic American Military Stencil-style font – Surplus Pro is undoubtedly the one for you. It looks exactly like the kind typography you might see in a war movie or video game, with a rugged look that can be brought to a whole new level by adding some grain and scratches to it, making it look a little more realistic.

Surplus Pro comes in two styles – one standard, and one rough version which has less-defined outlines and a more worn feel to it. The font comes in OTF format, which means it’s easy to use regardless of which OS or platform you’re using it on, and is very reasonably priced, even for E-Publication or Application use. 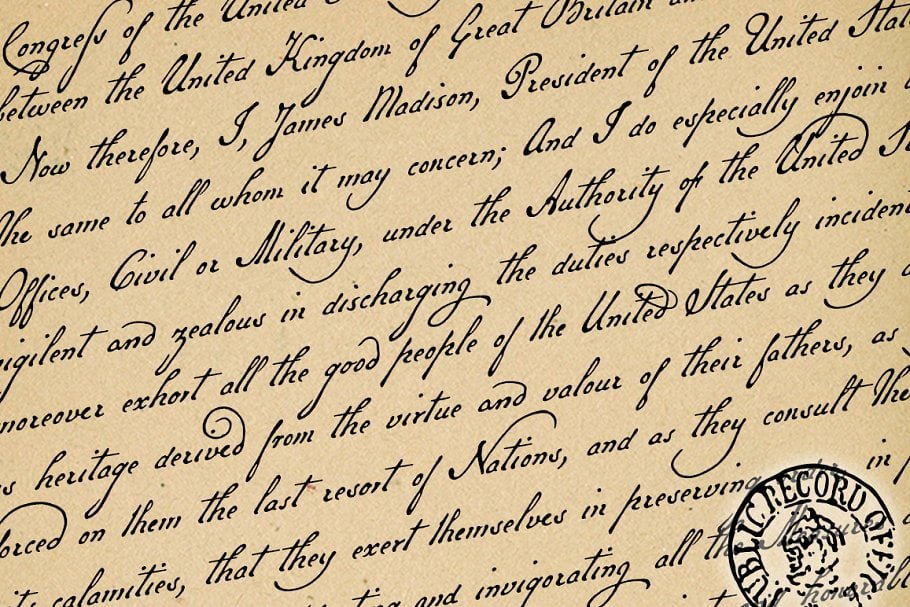 While it’s not what you might think of right off the bat when you’re looking for a military font, Military Scribe is actually a great option if you’re looking to do some dated-looking military typography.

It looks like the kind of writing you’ll find on documents like the Declaration of Independence and the various numbered amendments we so often hear mentioned. The creator behind the font referenced the work of three different scribes from the 1700s who wrote military documents and declarations at the time. The creator averaged the penmanship and styles of these fonts, creating a very versatile modern-use version, with more than 1000 characters available.

If you’re looking for military fonts of a war long gone by, then Military Scribe is your best bet. 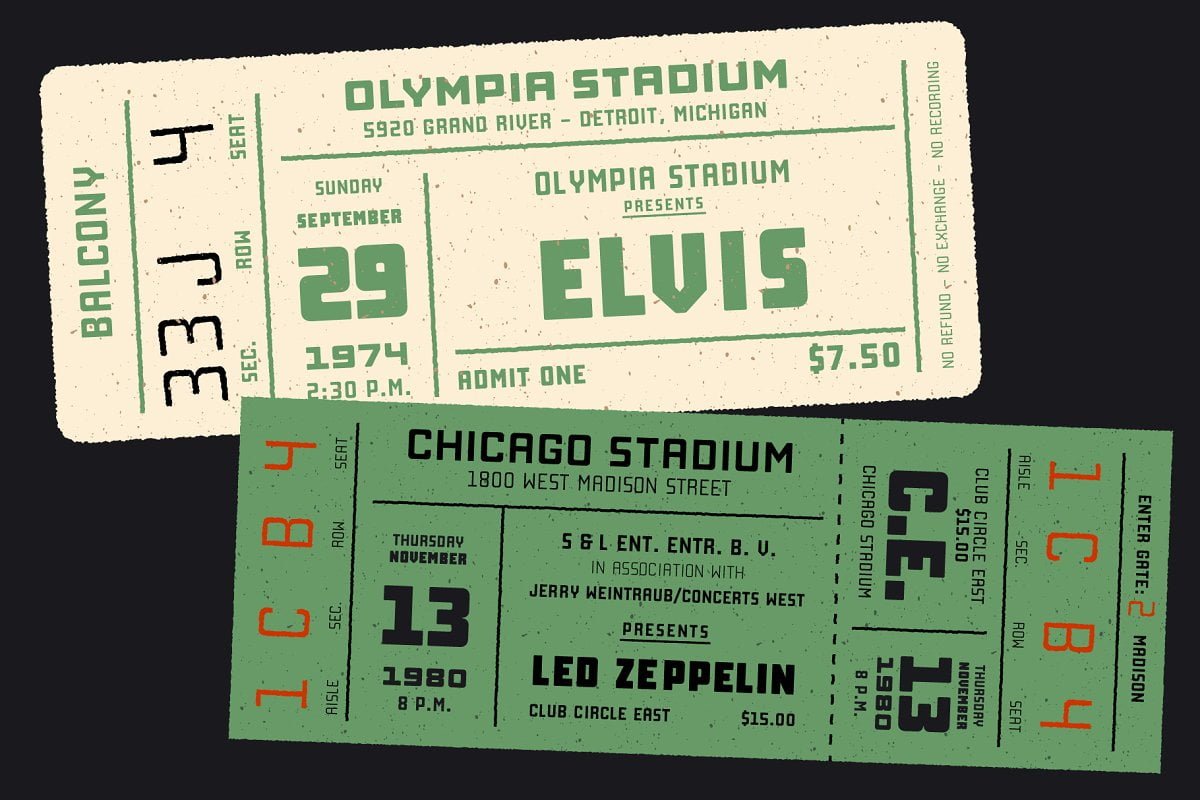 If you’re looking for a font that is modern and tasteful, with a military feel, a sleek design and some great options in terms of variation, then Manufaktur is simply one of the best you could go for. Based on an old cast-iron sign on a piece of aged Swedish industrial machinery, this Soviet-esque typeface is one of the most versatile military fonts you could find.

With both uppercase and lowercase styles, and 61 different available variations, which fluctuate in weight, spacing roughness and emphasis, Manufaktur can be used for such a wide array of styles and intents. Additionally, the font supports glyphs from a range of languages from all corners of Europe and comes in OTF, TTF and web font formats.

All in all, this is one of our favorites from this list – we trawled through a lot of military-style fonts and Manufaktur left us with the best impression overall.

War is In the Air 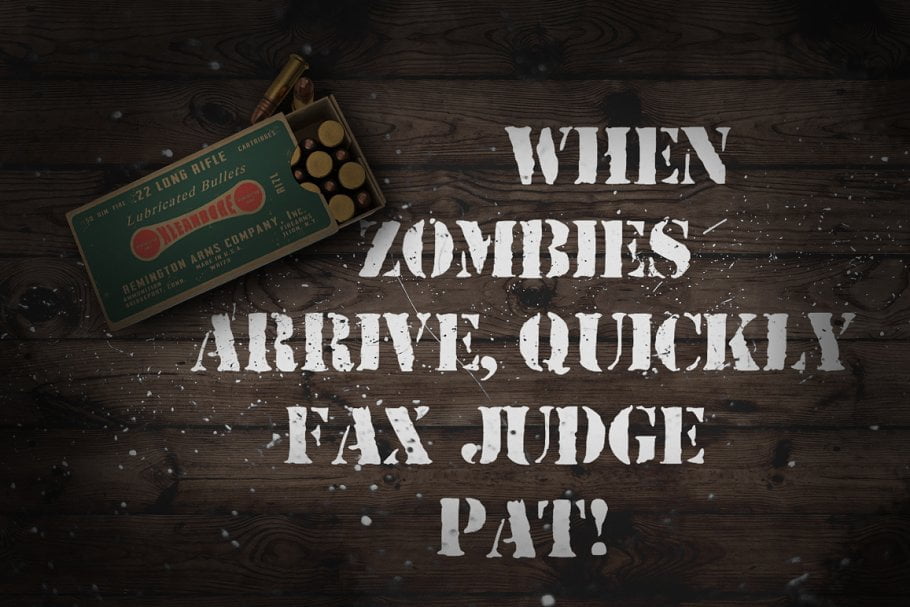 Looking like the font from the ‘Born on the 4th of July’ poster, War is In the Air is an American Military-style stencil font which we thought was very reminiscent of Vietnam era military cargo packages, and clothing prints. It’s perfect for capturing that slightly more Hollywood-ized side of Military fonts, somehow feeling more on the lighter or more comical side of military fonts.

The font comes in just one style, all caps – just like a real stencil. It’s got some grit to it, and can easily be applied to real-world objects in Photoshop, with a few added effects to look like it’s really been printed on.

The creator of the font also offers 24-hour support if you’ve got any questions, queries or issues with their package – a great feature as far as we’re concerned. 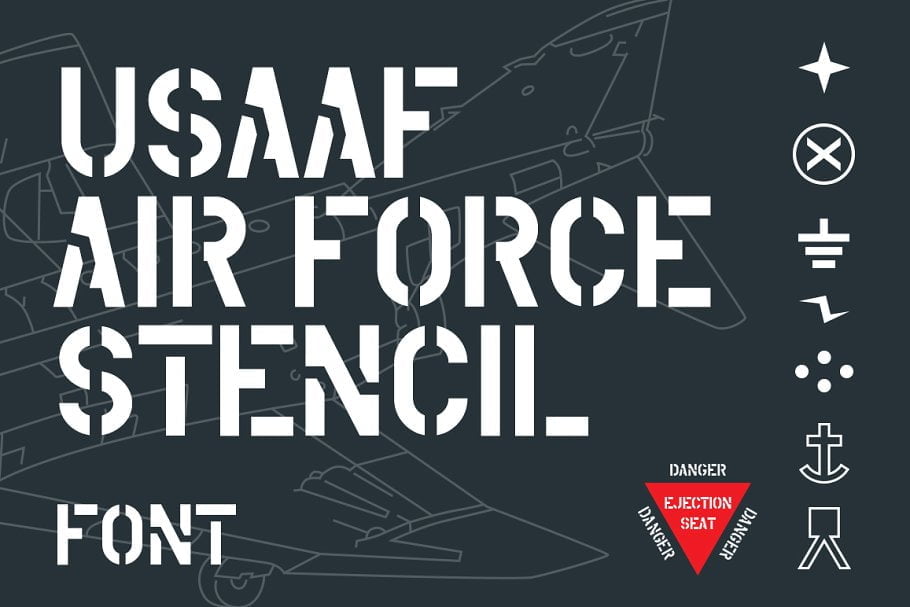 Inspired by photos and references from real aircraft, loading machines, cargo and more, USAAF Air Force is the ideal font to pick if you’re trying to find a Military font with a distinct aviation vibe to it. While it’s pretty simple and only arrives in one style, it really encompasses the feel of aviation and airforce style text.

It’s a simple, stencil-style block font with numbers, and should suit all of the air force-related typography needs that you’ll ever encounter. It’s available in TTF as well as PNG, which might be an added bonus to some designers out there. 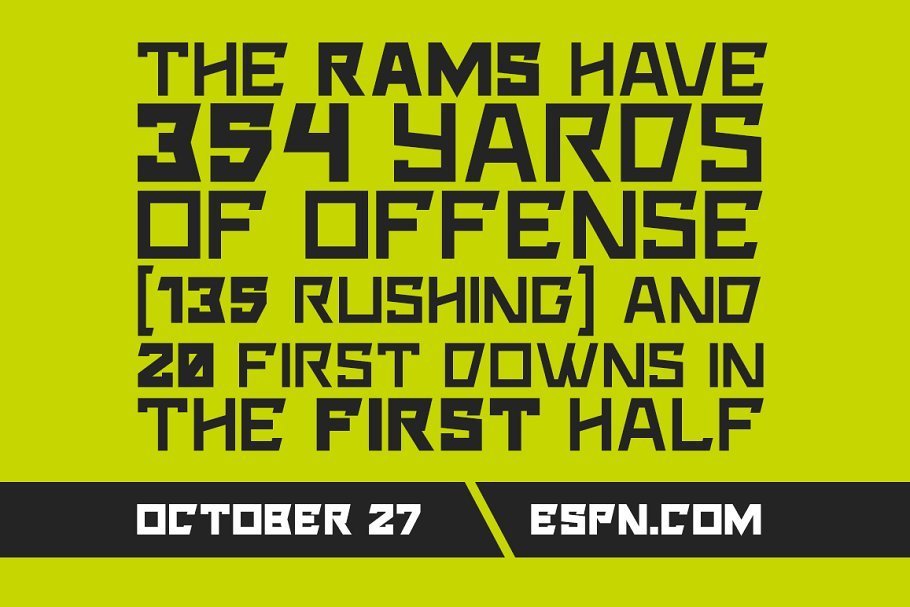 Reminiscent of the kinds of typefaces you might find in a futuristic battle-royale style video game, Gorilla perfectly captures a blend of futurism and military aesthetic in one fantastic package. It comes in four styles, from regular to bold italic, and is available in OTF format for easy use between programs and platforms.

Inspired by the likes of Nike, Under Armor and Adidas’ typography, this font is designed to work as a title case font suited to futuristic, industrial and brutalist designs. It’s got a harsh look, while still having some flow and direction so things don’t look to hard-cut.

All in all, it’s a great artisanal military font and is ready to use right out the box, perfect for branded campaigns or website headings. 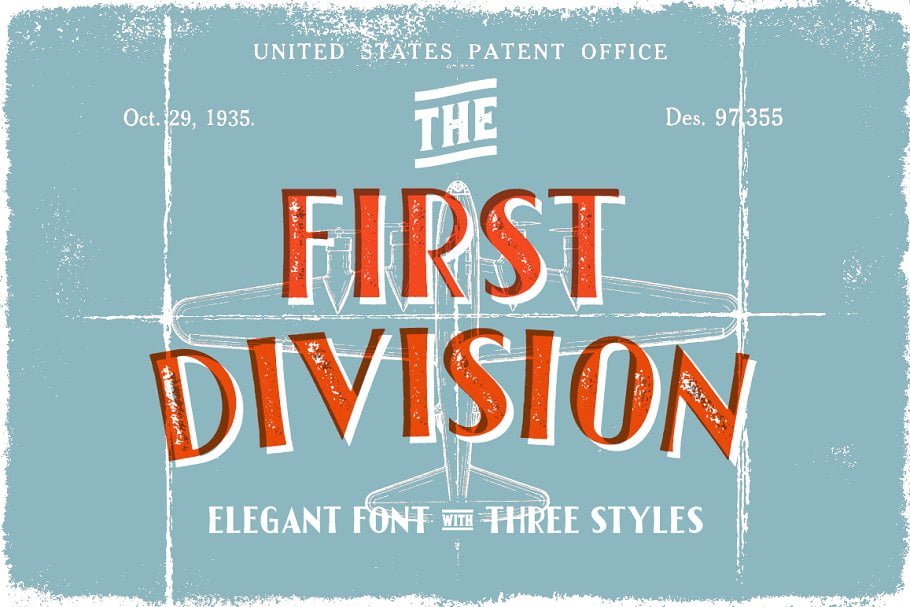 While the creator mentions using references from WWII aircraft names and aviation text, The First Division is almost closer to something emulating the style we’ve come to know through the Fallout video game series.

The First Division comes in three styles – one inline with holes in parts of the letters, one full black version, and lastly a letterpress version which replicates printed ink, perfect for getting some natural grain and a bit of a worn look in your creations.

The font also comes with some cool stylized glyphs, such as “and”, “from” and “Est. D”, all helping you create even more immersive and genuine vintage-style art. This is perfect for anyone looking for a military-style font with a distinct vintage feel, specifically from the 50’s, that might have been used on an Uncle Sam poster. 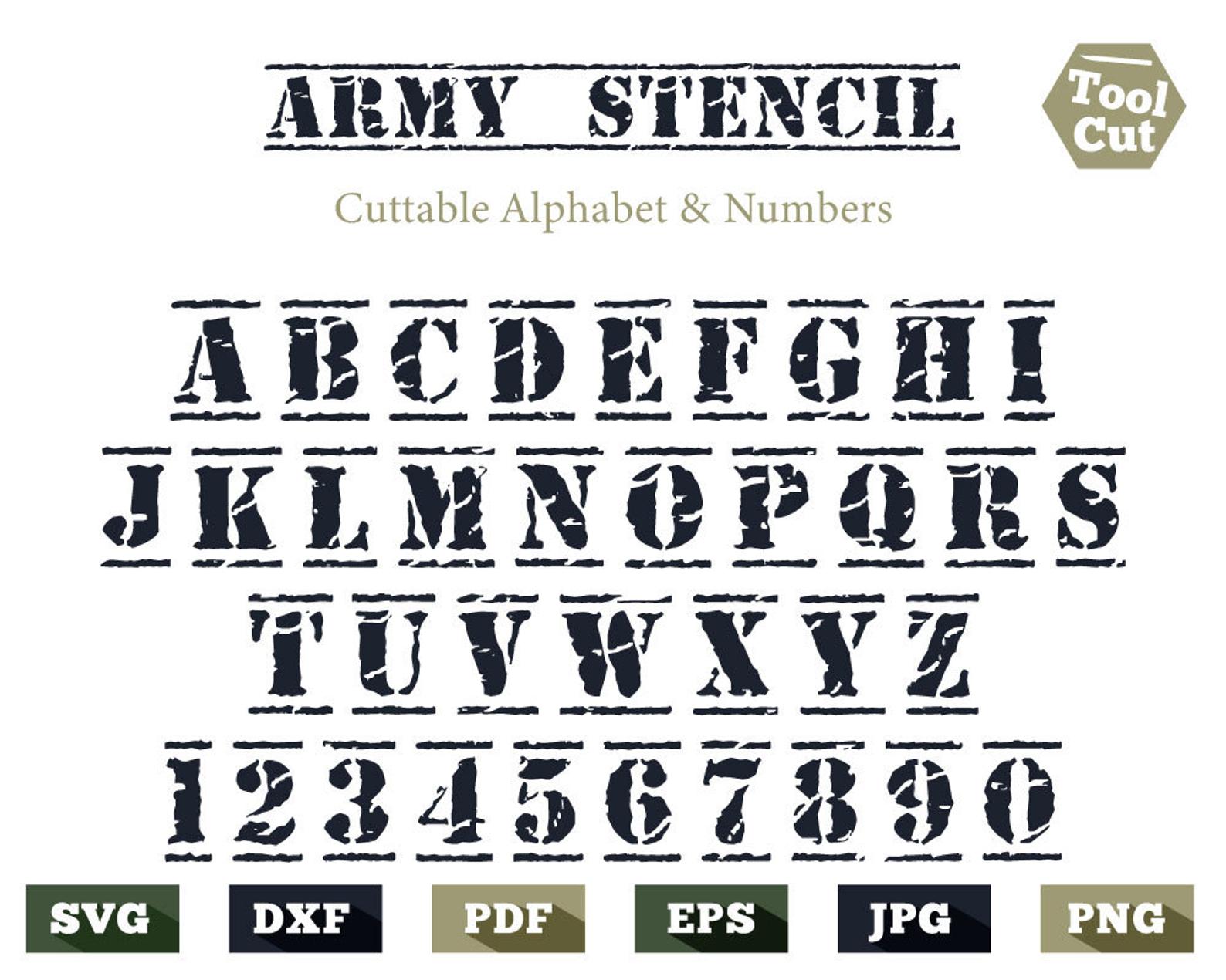 Army Stencil is just what the name describes. It’s an almost comically stereotypical army font, combining the classic letter style we’ve all come to associate with military fonts with an under and over-line, as well as some camo-style accents on the characters.

The package is available in a whole host of formats from SVG to PDF, JPG to PNG and more. It’s also super affordable, ranking as the cheapest font on this list by a long shot.

There’s really not all that much more to say about it than that. It’s possibly the most stereotypical army font one could find and does just that job perfectly. 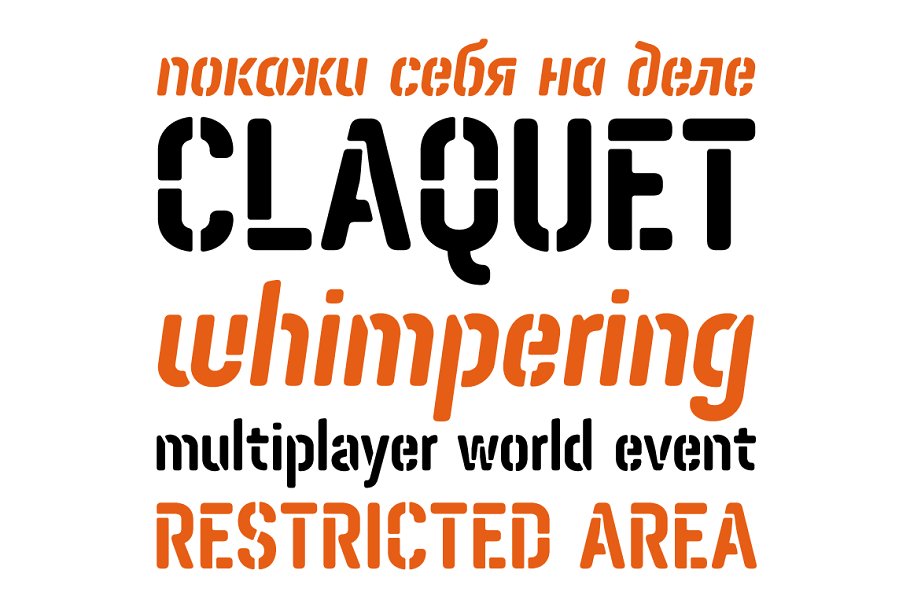 Targo, our favorite overall Military stencil font from this list, is a hugely versatile and incredibly professionally designed font.

It comes in lower and upper case, in both regular and italic styles, and appears to be inspired by military stencil fonts, modern rounded typography, and a whole lot of different language scripts.

As we mentioned before, it’s got support for over a hundred and thirty languages, including many strange and special unique characters. It’s quite rare to find an artisanal font that holds so much support for various alphabets, languages and scripts.

While this might not be the first font that comes to mind when you’re thinking about Military fonts, it’s one of the most versatile and well-designed fonts you could find in the category. Sure, the stencil may look a bit too new for some peoples’ use, but overall this font set beats out all its competitors in almost every other way. 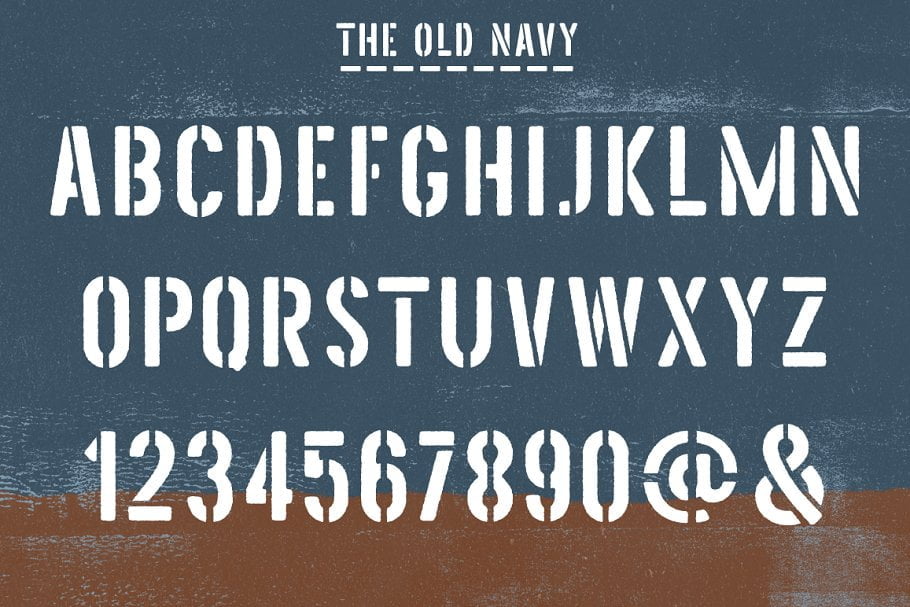 As you may have seen, The Old Navy was our top pick for a navy themed military font. It’s got a classic navy look, like the numbers and letters you might see printed on a giant marine tanker, or even a smaller Navy Seal boat.

It’s got two styles, one regular and one ‘grunge’ style, for that added effect of dust and grit that you often need with military designs. It’s very well designed, with letterforms and shapes exactly like the kind of thing you would expect from a US Navy-grade shipping crate.

There’s really not much more to say about this font pack – it’s all in the name. It’s ideal if you’re looking for a font in this style, for branding, logos, prints or posters or anything large and stand-outish!

Conclusion of the Best Military Fonts 2019

You should now have more than enough choices to consider when looking for military fonts for your designs. There is a wide variety of styles, sizes and ‘feelings’ in the fonts listed here, and you can easily combine them in various ways to create the military aesthetic you’re looking for. They’re all a little different and special, and we’re sure you’ll be able to find the right one for you from our list.

We’ve got more font guides coming soon, so be sure to look out for them!