Ruan Smit
We had the great pleasure of interviewing Anthony Silverston (and awarding him on our Honorable Mention section!). Anthony is a writer,producer and director at Triggerfish Studios and he’s been working hard to get where he is today. His creativity in Khumba and Zambezia is truly inspiring and the journeys he takes you on with his animations are breathtaking. 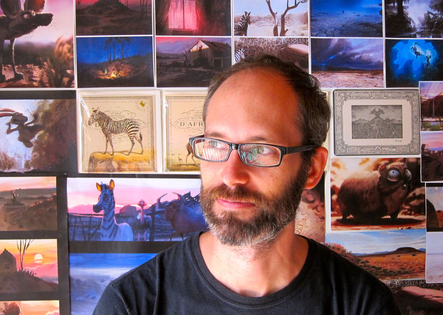 Read through our interview with Anthony to learn more about him and the animation industry in South Africa. Enjoy!

Tell us a bit about yourself?

I was born in Cape Town and grew up in Kalk Bay, when it was still a little fishing village. I went to Waldorf school where I think creativity and individualism are valued, which probably helped me in the greater scheme of things. But then I studied science because at the time there was not much happening in animation locally. I enjoyed sides of it but always missed art so after working for a year in a genetics lab I decided to make the shift and slowly worked my way into the industry through a few short films and many hours of working for free doing internships.

My first short film and a few small independent stop-motion jobs I landed were enough to get me a foot in the door at Triggerfish working on Sesame Street. After a few jobs there, however I realised I was not getting much time to actually practice on the job because stop-motion was in decline and I was having to support myself with proofreading, editing – and writing – textbooks,  so I decided to make the switch to CG. I’ve ended up being more involved in the writing side of things.

How did you get interested in animation, were there any animation titles out there that sparked an interest?

My mother was in ceramics and I remember playing with clay quite a bit as a kid. My father was studying film in Germany and during a couple visits with him we did a little animated film together – one with plasticine, one with cut-outs. I totally loved the Wallace and Gromit shorts when they came out and I originally wanted to do Khumba as a stop-motion short film like that. But as Khumba’s story grew, I realised he was always destined to be in a feature.

How did you become a director/Producer and writer in animation?

After studying for 4 years I didn’t want to study again, so I gave myself a project to do an animated short (The Slipper Cycle) from start to finish as a way of practicing the various parts of the process. I had some help in the writing and sound but pretty much did the rest of it myself with a little digital camera. I got it into a few festivals and used it as showreel to get some part-time work at Triggerfish on Sesame Street. I then did two more shorts (George’s Date and Sam Had Never Seen Her Look So Sad) in between various other small jobs and internships. With each of them I was trying to learn a different skill but after awhile I realised that I actually liked telling stories – and my ideas mostly happened to be animated.

Sam Had Never Seen Her Look So Sad

One of the story ideas I had was about a half-striped zebra and I was working on it as short, but it really only became a screenplay when I met my co-writer Raffaella Delle Donne and together we entered a competition which we eventually won. While writing Khumba I was actually doing an internship on the very early Zambezia promo. I began to give notes on the Zambezia script and then when I became a partner in Triggerfish, the script became one of my primary responsibilities. Since Khumba was essentially a personal story though, it just made sense for me to direct it and by then I had built a bit more experience.

We noticed you were the director on a few shorts, tell us a bit more?

I did one a year for 3 years. All of them got shown around quite a bit but looking back I can see they are pretty rough. They are all online, and although I still cringe at parts, I’m still proud of what I accomplished at the time. My first, The Slipper Cycle won Best Independent Animation at the Independent’s Film Festival in Florida and showed at quite a few festivals.

I really enjoyed the chance to experiment with different methods and looks with each short, but then paid work became a priority and after that the features completely consumed me. Also, directing a short where you do most things yourself is very different to working with a team of a hundred people. It can be very rewarding to finish something and with features taking so long, although the reward is bigger, you have to wait much longer for it so I wouldn’t mind doing another short film soon.

What was your first job title in the animation industry?

Intern 🙂 I was lucky to get the chance to work on a stop-motion feature in Germany but that was 10 years ago and it’s not even finished yet.

Moving on to Khumba, how did you come to the story about a young zebra without any stripes?

There is the real-life story of a half-striped zebra called a quagga which I was aware of, but then it was really drawn from my own personal (ongoing) quest to feel “whole” or journey to feel comfortable in my own skin. The story is about anyone who feels different and the zebra skin was an easy visual metaphor. The actual plot evolved as Raffaella and I worked on it, but the core of the story has remained the same over the years.

What were the main challenges that you faced during the production of Khumba?

We went into Khumba while still finishing Zambezia, so we could apply a lot of lessons we had learned but there were still various challenges that come with what was essentially a very small budget for an animated film. The team at Triggerfish really stepped up and did such an incredible job however that I’d say the biggest personal challenge was actually to deliver my side of things.

Creating a feature film that will engage an audience for 90 minutes is a challenge in itself and it got a bit exhausting having to make many, many decisions every day for a couple years – especially when you only find out the results of each decision 2 years down the line at which point you see whether it paid off or not. I definitely got a few more gray hairs.The other issue that kept me up at nights was holding onto that core story throughout. Over time, as more people’s input strengthens the movie, there is also the potential that at any one stage something can take it off course. Because it’s always a work-in-progress, you really have to take every persons’ criticism with a pinch of salt.

There were a couple times when a scene didn’t look like it was working and was in danger of being cut, but I had to believe in the initial intentions and see it through all the way until other people could see it too.

How do you see our animation industry in SA matching up to international studios like Pixar etc.

We obviously have a much smaller industry, but it’s made up of a lot of talented individuals. And because we don’t or haven’t had the same resources or experience we have had to come up with different ways of doing things. I’ve heard from a few people who have gone on to work at international studios after finishing Khumba how efficient we actually are as a studio which came as a nice surprise. I guess the work coming out of the country speaks for itself – some people criticize, but most are amazed.

I wish I did, but I’m pretty bad at getting into any kind of routine. I get bursts of creative inspiration but for the most, I just go to work everyday and try and apply myself as best I can.

You mentioned that you have a passion for stop-motion. Any future plans?

I’ve recently started sketching up some panels for a short I’ve had in my thoughts for a long time. But for now, stop-motion is going to have to be my hobby 🙂

What is your advice to somebody who wants to break in to the animation industry?

Get involved in things like animationXchange and Animation SA – it’s a great way to network and for people to find out what you do. Don’t be shy to share your work and enter it into festivals. It’s a great way to get exposure. But also look at what’s out there and be honest with yourself. There are many different facets to the industry – if you are not the best character animator for example, rather focus on a different aspect in which you do excel. Some lucky people have natural talent, but it takes time and perseverance to get in to the industry – just make darn sure you are ready to take the opportunity when it comes.

What kind of software does Zambezia and Khumba use?

Zambezia + Khumba were both done in Softimage although Zambezia was rendered with Mental Ray and Khumba with Arnold. We modeled in Z-brush and composited in Nuke.

What software would you recommend for a beginner?

Thank you for the great interview Anthony, we wish you all of the best in your future endeavors. Keep on inspiring!