Rico Schacherl Interview – A Legend in the Satire Cartoon World

Tell us more about yourself!

My name is Rico Schacherl (full first name is actually Enrico), I was born in Linz, Austria and came to SA when I was 4 years old — live and work in Jozi from my home studio with my wife Danya who also works from home as a freelance book and copy editor and proofreader. 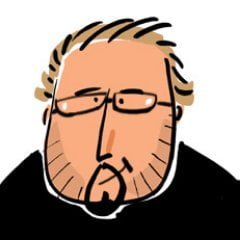 I studied a bit of graphic design and architecture in mid-80’s — just missed computers for layout and design — but was always keen on doing cartoons, comics and animation.

Got my start working at a magazine publisher of a satire magazine called laughing Stock — this is where I met Stephen Francis and Harry Dugmore, the three of us ending up starting the Madam & Eve comic strip after the publisher closed down.
Aways read comics — was big fan of Asterix, Tintin, the Carl Barks Disney Donald Duck stories — also the early Mickey Mouse adventures and also loved films like Jungle Book etc.

Source:TheNalibaliChannel
Later big fans of Calvin & Hobbes (still the best comic strip ever!), The Far Side, Bloom County and the political satire of Doonesbury. 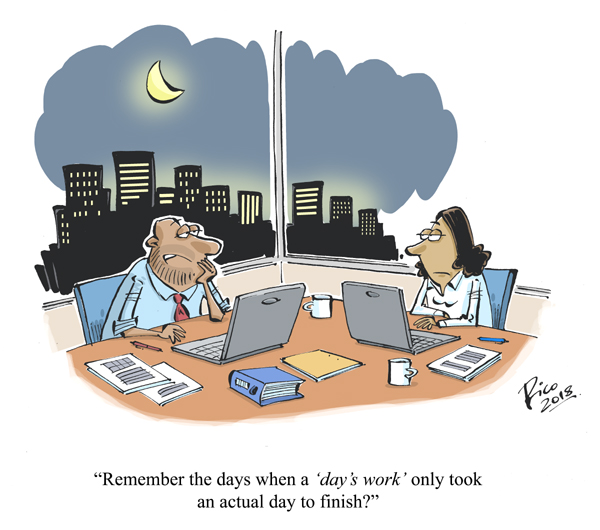 What inspired you and Stephen to create Madam & Eve?

When the publisher we worked for closed down and we went off on our own, I was working for the then Weekly Mail (this is now early 1992 and there were exciting changes happening in the country) doing editorial illustrations and heard they were looking for a weekly satirical comic strip. 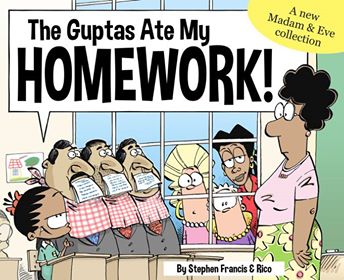 Stephen came up with the title Madam & Eve and the setting based on his experience of coming to SA from New York with his new South African wife and seeing the, for him, weird suburban set up of white families with a live-in domestic worker.
After some experimentation, inspired by the US Doonesbury strip, we decided on a political/social satire strip set in a suburban home — and once Mother Anderson and Thandi joined a little later, the cast was complete.

How did you dream up Madam,Eve and Mother Anderson?

Madam is loosely based on Stephen’s then mother-in-law — who’s name was also Gwen … just a concidence.
After a few years, we realised that the conflict between Madam & Eve was lessening due to Eve’s tutelage of Gwen into the “new” South Africa, we needed a new, more conservative character to speak lines and have opinions that only a crotchety 80-year-old granny could say, And then, as a counter foil Thandi grew more and more a main character — as they say: out of the mouths of the young and the old, and the generation chasm is fun to play with.

What is your favourite comic book series now and back in the day?

Back in day it was Tintin, Asterix, Carl Barks… quite a bit of the French bande dessinee, big fan of Moebius (and his Blueberry series under his real name Giraud), the Valerian SF series (that was turned into a rather disappointing movie). Also read a LOT of 2000AD — although Judge Dredd was my least interesting character.  Then there was the US/UK graphic novel revolution with Frank Miller and the Watchmen. Still have a pile of Heavy Metal magazines somewhere. 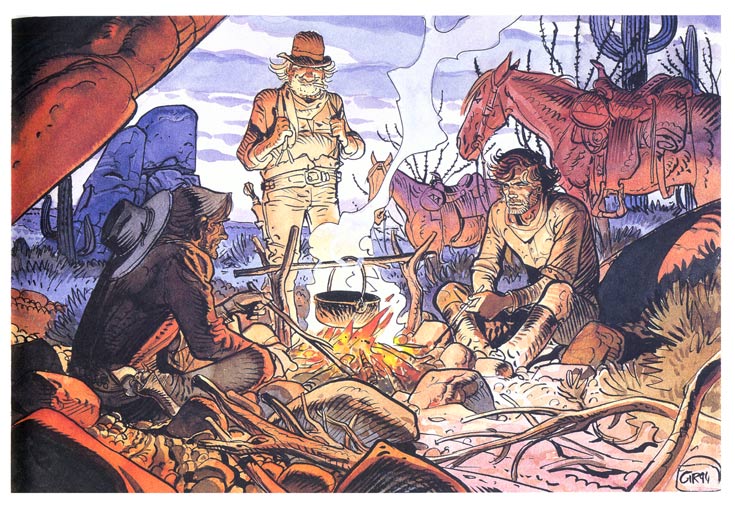 What are your hopes for the comic/illustration industry? (Has it grown to what you expected?)

I think besides the odd bright spark with self-published comics and SupaStrikas, there isn’t real comic publishing industry in SA — we export some talents to go work for Marvel overseas.
There are lots of talented illustrators and cartoonists out there and coming up all the time, but weirdly, the media space is proportionately shrinking rather than growing — more people with access to media, less people reading and buying stuff.

What’s your take on the animation industry in South Africa?

I don’t know too much about it, really, except the bits and pieces I see in media — haven’t worked much in that space over the years, focusing mainly on comic strips, cartooning and illustrating.

Should we expect a Madam & Eve animated series seeing as we already had the live version?

A few years ago we did the experiment of what it would take to make a Simpsons quality Madam & Eve animated series (we’d loved to do shorts, but nobody pays for those or even knows how to screen them) — just to the work and money that would be involved. Nobody has that kind of money in SA these days.
Ironically, the animation would be the cheapest aspect — good writing, good voice talent, studio time with the voices, rehearsals, editing etc would be the really expensive stuff.

Are you interested in TV work or are you a hardcover/paperback/online guy?

I have worked in TV, but these days it’s a mix of print/online/kids/educational work… some international too, which can be interesting.
Do you do your own writing, inking and drawing or do you have other people for that, so that you can on a specific area?
Pretty much, yes — keep things small and streamlined. Have a few freelancers I sometimes use for digital colouring or who I pass on work I can’t fit in and it’s appropriate to their skills — but last few years, so many project deadlines are so crazy, it’s hard to schedule freelance assistants.

Can you recommend sites for someone who would like to publish their work or get started in illustrating?

Not really — it is really hard to get noticed these days with all the noise and the, on the surface, huge amount of talent out there.
That said, working as a pro illustrator is more than just artistic talent (of which there is a scary lot out there) but also working to brief, deadlines, coming up with good ideas/concepts on demand etc… andthe ability of handling rejection — my number one requirement for a pro artist/writer.

Your favourite superhero? What would your powers be?

Moved on from superheroes quite a while ago  — was always more of a Batman/Wolverine/X-Men kinda guy rather than Superman.

Do you feel illustrators are getting enough support in South Africa?

No, not nearly enough — I think it’s gotten a bit better lately (but probably not financially).

Have you gotten into trouble for your work?

Not really — we kinda know what works and we have always kept the humour quite balanced and kind of charming and light, both with Madam & Eve and my editorial work.
Occasionally, I get a bit flamed on social media when my opinions don’t agree with others, but we are pretty good by now with presenting “fair comment.”
Get a bit burned out with all the political satire stuff as well every now and then — need to get back to working on those children’s book ideas I have stored away in my head — I LOVE doing work on illustrations for childrens stories and books and the Nal’ibali reading and literacy project. 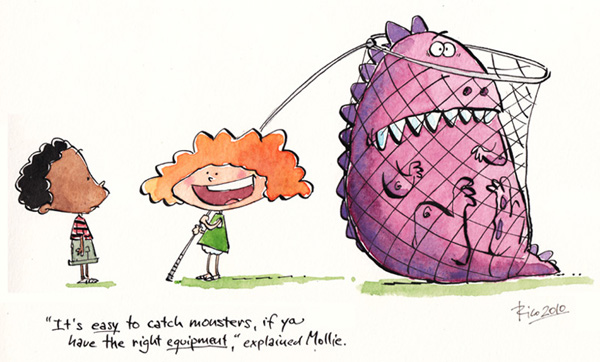 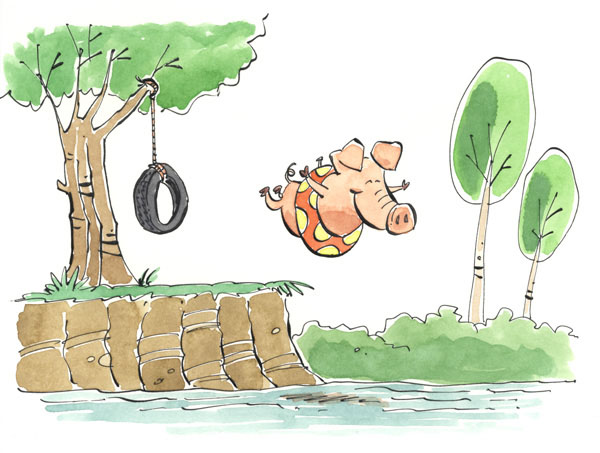 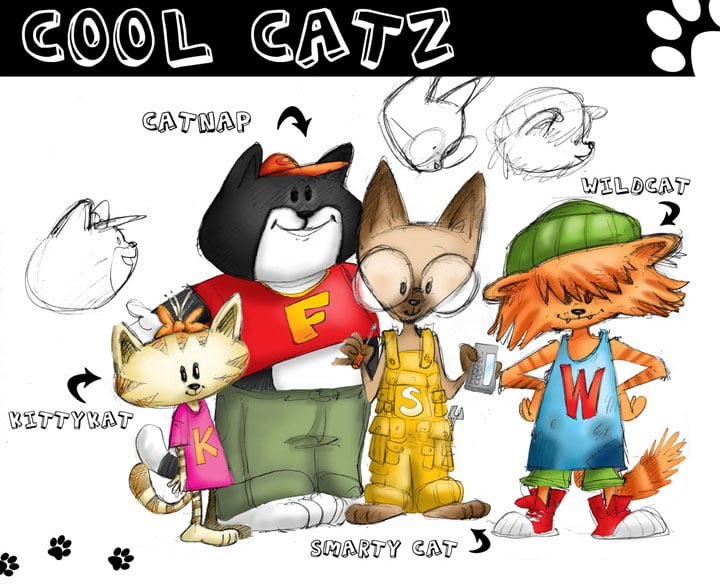 Lastly, we just have to know, will the three guys on the back of the bakkie ever find true love?